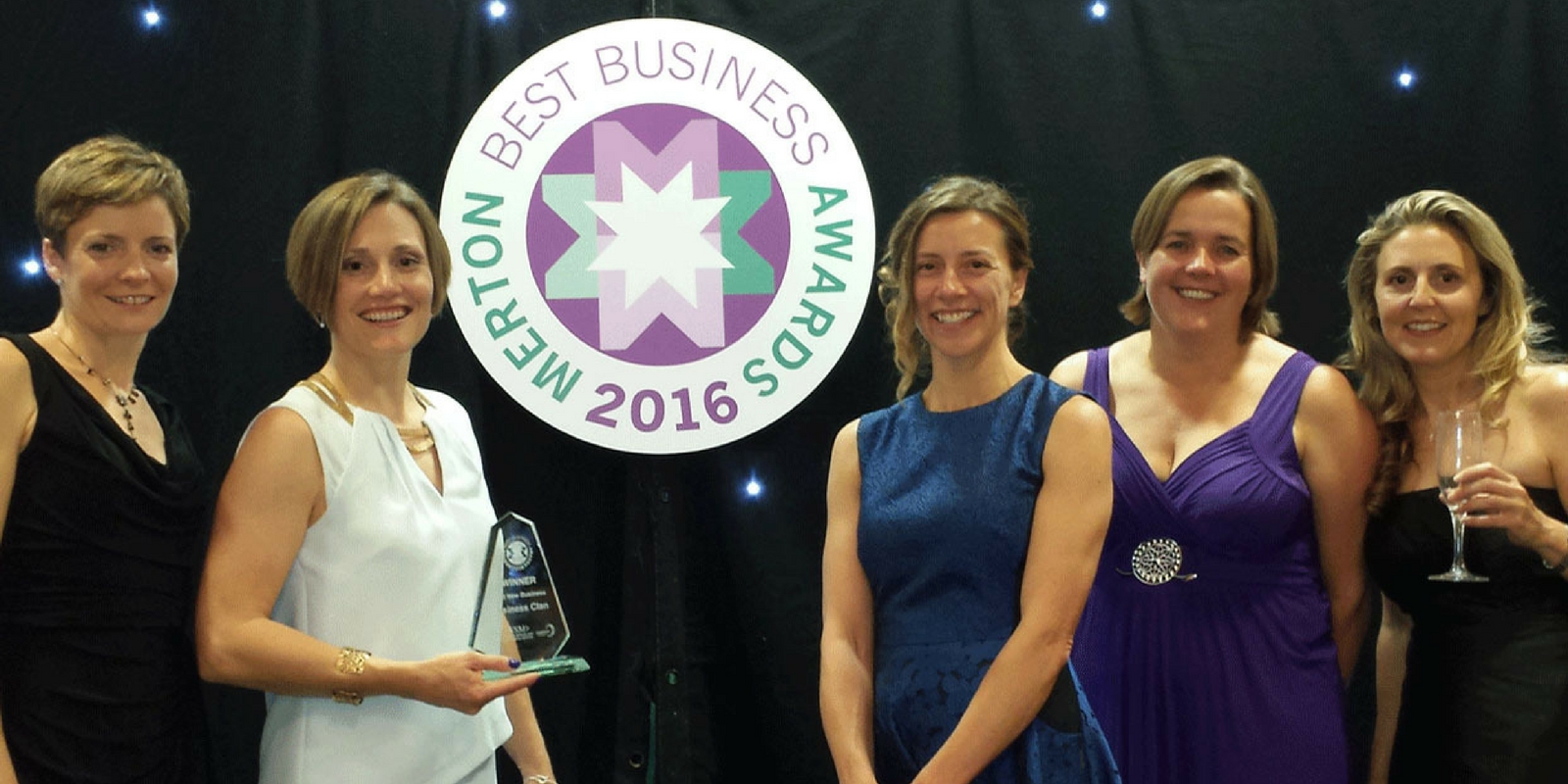 The All England Lawn Tennis and Croquet Club. Now there’s a venue worth getting dressed up for. So on 22nd September, still glowing from our win at the FSB London awards in the summer, Nicolle and Delia donned their (different! – this is getting expensive!!) evening dresses in anticipation of the glamorous night ahead. This time they were joined by long-standing members of Business Clan: Lucy (web design & IT), Leeza (marketing & social media) and Naomi (HR & recruitment). It felt great all being out together keen to celebrate the year’s successes regardless of whether we took the trophy home.

After the obligatory photo in front of the Fred Perry statue, we joined the throng of 250 local business people for the drinks reception. Cue more photo opportunities in the iconic venue, before heading through to dinner.

We were seated at the same table as sponsors South Thames College and had a very productive chat over the meal (watch this space!) before the entertainment interrupted us. This was the only let down of the evening, as although they were talented singers, 9.30pm is a little early in proceedings to be singing “That’s amore!” and doing the conga, especially when we had heard it all the year before and also at the FSB awards. We were, however, highly entertained by the unamused looks on the faces of the cool kids on the Time & Leisure table. Hats off to Diana Sterck of Merton Chamber of Commerce who had no option but to gallantly join in.

After dessert, it was time to get down to the real business of the evening. The presentation of the awards. We’d studied the competition beforehand and knew we were up against Wimbledon Brewery, so were hoping for second place at best. The runner-up announcement came and it went to Ensere Ltd. Although we were pleased for Sahaj, our faces fell in disappointment, but only for a moment, as Paul Harvey from Morrissons Solicitors opened the envelope and declared the winners of Best New Business “Business Clan”! We erupted in screams of delight (see our Twitter feed for evidence!) as Delia headed for the stage with her usual lightening efficiency, leaving Nicolle to chase her up there for a congratulatory hug. Paul looked a little bemused at us being quite that overjoyed, but hey, we work hard, and it is so great, when it pays off.

Wimbledon Brewery’s moment came later in the evening when Time & Leisure bestowed the Editor’s Choice award upon them. Eligo Recruitment were the stars that shined the brightest on this glittering night as Overall Winners.

Congratulations to all finalists, runners up and winners. We are really proud to work in such a strong community with a wide range of established and growing businesses. Thanks to everyone for their congratulations on the night and via social media and email in the days following. We really appreciate it. And one massive thank you to all of the Business Clan team who made the magic happen. We’re getting a taste for success, let’s see what happens next!

Previous Post
Join our team! We are recruiting.
Next Post
The Really Helpful Club’s Back To Business event