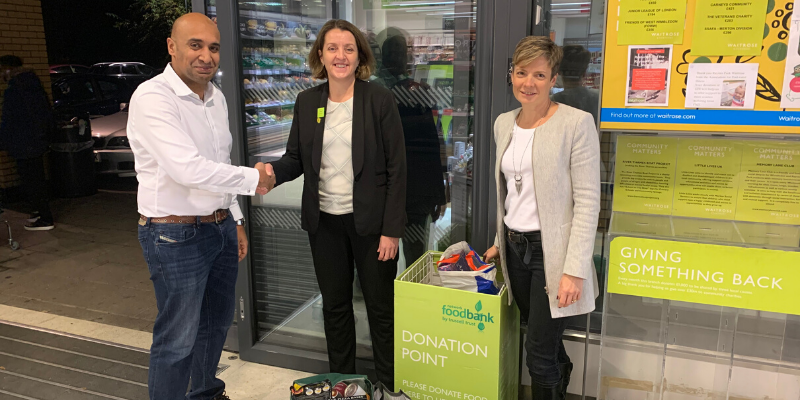 Aldermore isn’t your typical bank. They take a refreshing approach to personal and business banking, and their can-do approach to supporting customers has made a huge difference to many individuals and SMEs (small to medium sized enterprises) that have simply needed banks to look at them differently, recognise their potential, and champion their cause. Where other banks have said no, Aldermore puts opportunity first to make things happen for their customers. Founded in 2009, and now celebrating ten successful years of business, Aldermore’s responsible, supportive and refreshing approach to banking has helped many entrepreneurs make their dreams a reality, many first-time buyers get their foot on the property ladder, and many SME’s thrive and grow.

As champions of small business and entrepreneurship at Business Clan, we were delighted to receive a call from Aldermore’s Chief Operating Officer, Zish Khan. He asked if we could design and deliver a short teambuilding session for his team, as part of their planned strategy away day at Cannizaro House on Wimbledon Common. Could we ensure that there was an element of ‘giving back’? Could we squeeze all this into a one-hour slot, after lunch? And could we deliver it in four days’ time?

There was only one answer to all of those questions … absolutely! With our creative juices flowing, we set to work on a few ideas for a session that would get the team working together and collaborating. We looked to create some fun competitive spirit, address a serious and relevant corporate social responsibility theme, energise everyone (it was the post lunch slot, after all – famously termed the ‘graveyard shift’ of any training or presentation session!), and, above all, make a real difference out in the community. Therefore, our decision to turn Aldermore Bank into a Food Bank (just for one hour!) came easily.

Food poverty is on the rise, with recent news reports telling an alarming story of the increasing financial struggle faced by many families (in many cases, in spite of being in employment). A growing proportion of the population genuinely face a daily choice between food or basic hygiene essentials such as soap or shampoo. Before 2008, food banks were practically unheard of in the UK. By 2014, there were approximately 1,000, and by 2017 this figure rose to 2,000.
The Trussell Trust is an NGO and charity that supports the largest network of food banks in the UK. Their research shows that the most common usage of food banks comes as a result of pressures created by benefit changes or delays, the additional cost of providing meals to children during school holidays, debt and delayed wages. For many, the financial struggle is all too real, and more help is desperately needed.

With over 90% of food donated by the public and by organisations (churches, schools, companies), food banks rely on the benevolence of the communities around them. But the lack of available supplies means that even when struggling families have made the daunting step of reaching out for help, supplies at food banks have been so desperately short that their needs cannot always be met. In December 2016, the Trussell Trust revealed a 47% increase in the number of emergency food parcels handed out. Public generosity that month made that possible.

And so it was that we set the COO’s team at Aldermore one task ahead of their away day. Fling open the kitchen cupboards at home and bring anything non-perishable, and in date, which could be donated to those facing a daily battle against hunger. Little did they know it, but they were to be divided into three teams of twelve, competing against one another to turn their collective items into a food package which would include a week’s worth of healthy, tasty recipes with zero waste and maximum nutrition.

One initial concern in the planning was whether everyone might just bring pasta and rice. Thankfully, Waitrose Raynes Park were more than willing to donate a supply of varied items which we took, along with some of our own offerings, to cover this eventuality. There was also some concern on our part when we arrived to deliver the session; the sight of three disparate products on view on the team tables meant that the only feasible outcome of the day was likely to be a very small and unappealing tuna korma, a side of spam and no rice. (It was with great relief that we discovered all the rest of the donated produce piled high behind the reception desk). As for the pasta and rice concern – we need not have worried. The generosity of Zish’s 35 strong team at Aldermore was astonishing. Most people brought way more than their one designated item, and the range of produce was incredible. With a fifteen-minute deadline, each team set to work to come up with a menu that made the best of their donated goods, turning them into healthy family meals to last a few days.

There was competition, team spirit, fun and much banter – the noise levels ramped up as teams ‘negotiated’ trade deals to swap produce, and heckled one another in good spirit as they presented their menus for the final votes to be cast. But there was an important serious side. Everyone left that session with a much greater awareness than they had before of the impact food poverty can have on real lives, and how we can all work together to make a difference in our local communities. Even the smallest donations help, and with food banks depositaries on view in most local supermarkets, not to mention the nationwide charity run food banks themselves, we all vowed to make this more than just a one-off contribution.

As for making a real difference, we were delighted to be able to deliver Aldermore’s generous donations of the day to the food bank at Waitrose Raynes Park. The team’s collective contribution more than overflowed the capacity of the food bank box, which will hopefully go some way towards supporting local families who are struggling with food poverty.

We’d like to thank Aldermore for the opportunity to design and deliver such a meaningful teambuilding event, for the generosity of their whole team, and for the energy and fun they brought to the session. Our thanks also go to Waitrose Raynes Park, who supported us both with their donated produce, as well as by taking in the collected items.

Our session at Aldermore proved that working together can make a big difference. To find out how we can tailor a similar teambuilding session for your business, or for further information on our HR and Training support services, contact us. We’d love to hear from you.

Are you looking for a tailored teambuilding session for your business?
GET IN TOUCH
Tell us about your business challenge

Previous Post
Come and see us at Chessington Expo
Next Post
Is the Government business support package enough? Can we make it work together?
Menu